Once a must-have apparatus for every school/office where document reproduction was required, the Roneo machine has now become obsolete technology.

The Rotary Neostyle duplicator was one of the best-selling machines of its type and its name later become a generic term for the devices. I do remember a similar machine called a “Gestetner” they both were good at getting ink all over your hands.
Younger generations might not be familiar with the device and most likely have not even heard of it. But for us older generations, the Roneo machine provided copying technology as photocopiers were yet to be invented.

Stencil duplication was a low-cost printing method that worked by forcing ink through waxed-paper stencils on to target paper.

Who could forget the purple ink that rubbed off on your hands, the copies had a smell that was recognised by any 1960-70’s school kid.

The machine was suitable for reproducing a small number of documents such as school worksheets or exam papers or community newsletters. 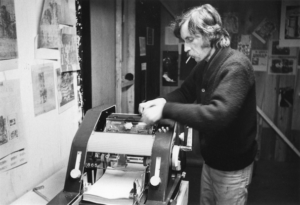 Every large and medium-sized school would have a “Roneo room” which was a prohibited zone for students as it was where exam papers were produced.

Teachers would prepared masters by typing or drawing on stencil papers and bring the master documents to Roneo room.

The stencil papers would be wrapped around the drum of the machine, which forced ink out through cut marks on the stencil. You could be asked to turn the handle which was fun at first but after a few minutes became a bore.

The duplication quality varied, especially when used to reproduce a large number of documents. 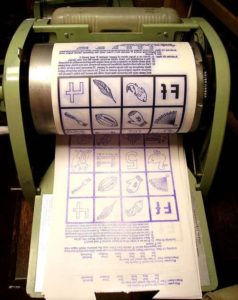 Students found some letters or words unreadable because the stencil paper had torn, causing black ink to seep through the hole and create black spots on the paper.

This was why exam instructors would ask students to carefully check the exam paper before they started the test to make sure that every word and sentence was readable.