Mr Whippy was a major source of panic amongst Melbourne households during summer holidays. As soon as you 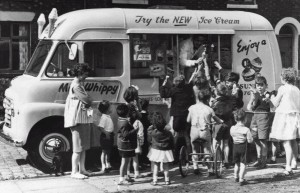 heard his faint musical tune getting louder, a mad rush ensued to find a parent willing to part with a few coins. You then had to sprint & hopefully catch Mr Whippy before he merrily made his way to the next street, oblivious to the devastation he left behind if you weren’t fast enough.

His ice cream was the creamiest and most delicious! You could have it dipped in chocolate, hundreds & thousands, or topped off with a flake. You could also opt for a cup with nuts & topping. Lime was my favourite! Mr Whippy’s pink van was a delight to children & adults alike, especially when he pulled up right outside your house!