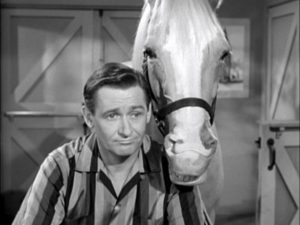 The starring character “Mister Ed” is a horse who is owned by Wilbur Post. Mister Ed is not just any horse, he talks to Wilbur, but not anyone else!

Of course this gets Wilbur in to all kinds of trouble including his wife who becomes jealous of Wilbur’s attentions to Mr Ed.

Theories abound as to how Mr. Ed’s lips moved during the eight-year run of the 1960s television show. According to website “Wide Open Pets “Initially, a string was used. However, after training with Les Hilton, with whom the horse celebrity formed such a strong bond that he would only respond to him, the gelding learned to wag his lips whenever his hoof was touched.”

Many more secrets abound with this iconic black-and-white TV show: 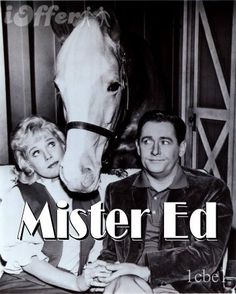 Mr Ed was another of my favourite “after school” TV shows & I remember wondering if the horse was really talking!  I also recall my Mum also enjoyed this show and coming out to watch it whilst she was cooking the dinner. Mr Ed got Wilbur into some very funny situations & the show appealed to many ages. I also wanted a horse after every episode!