Cod liver oil is very good for you… who remembers that statement from a determined mother trying to force a nice big spoonful into you?  Well apparently she was right, more than you ever knew!

Research studies ranging from 1918-2001 give cod liver oil an A+ rating. This marvelous golden oil contains large amounts of omega-3 fatty acids, more vitamin A and more vitamin D per unit weight than any other common food. One hundred grams of regular cod liver oil provides 100,000 IU of vitamin A, almost three times more than beef liver, the next richest source; and 10,000 IU vitamin D, almost four times more than lard, the next richest source. Of course, cod liver oil is only consumed in small amounts, but even a tablespoon (about 15 grams) provides well over the recommended daily allowance for both nutrients.

Cod liver oil is most famous for contributing to bone health, preventing and reversing rickets in children and osteomalacia in adults. Before the discovery of cod liver oil as a source of vitamin D, many children suffered greatly with deformed bones. Books on feeding infants published in the 1930s and 1940s routinely recommended cod liver oil, starting with 1 teaspoon at the age of three weeks. 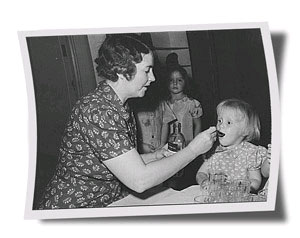 So Mum was right & no doubt many of us have benefited from the golden oil. I recall getting malt on a spoon straight afterwards, in an effort to disguise the horrible taste & probably to prevent me spitting it out!.  Tell us your cod liver oil experience?