The formal five-course dinner parties of the 1950s and ’60s gave way to more casual dining. The social trend in the 1970’s became fondue parties and progressive dinners. 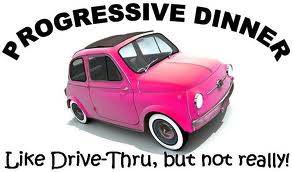 Progressive dinners were essentially a group of eaters who would go from home to home, with homeowners preparing and hosting different courses. Everyone used to follow in convoy & all converge on the house hosting the next course. You could always tell you were in the right street, as it was full of cars!

So for example a bunch of friends, neighbours, clubs or groups would get together at one of their homes for entree or appetizers, then go to another  home for the main course and then everyone would go to another home for dessert, coffee & after dinner mints (of course)! Appetizers usually consisted of cocktail sticks with cheese & pineapple/gerkhin, ritz crackers with smoked oysters, french onions soup, tiny crustless sandwiches & plenty of nuts, crisps & the obligatory bowl of homemade fruit punch. Main courses were lots of casseroles, cold meats, accompanied by an array of salads including potatoe, coleslaw & rice salad. Desserts always included pavolva, cheesecake, trifle, jellies & brandy snaps. 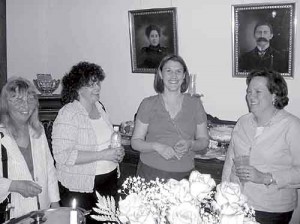 This was before women really began to hit the work force in the 1970s. The participants would decide on a plan (who would prepare the appetizer, the main dish, the dessert). Then those gals making the dishes made them earlier in the day, so they could enjoy the party. People were not so hung up about dirty dishes. They put the dishes in the sink and went on to the next location. By the time you’d finished dessert, you’d eaten & drank way too much!

These dinner parties were lots of fun & before the days of random breath testing!

I was priveleged to be taken to several of these when I was around 8 to 12 years old with my Mum. They were incredibly exciting and I felt very grown up being invited as they usually did not encourage children! I loved being able to wear my best dress & shoes and travelling around to various houses and sampling lots of delicious food. By the time dessert & coffee came though I was getting pretty tired & very full!

One Reply to “Progressive Dinners”