During the 1930s Coles opened Australia’s first in-store cafeterias and a visit to the Coles café became a popular family outing. The Coles Bourke Street flagship store  was opened in 1928 and traded until 1987.

The highlight of a trip to Melbourne during the school holidays was lunch at “Coles Cafeteria”. I can still hear the lift attendant announcing “Level 6 – Cafeteria” as the elevator came to an abrupt stop &

the heavy doors jolted open. As you neared this floor you could to hear the loud chink of crockery, the delicious aroma of your lunch approaching & the loud hum of shoppers chatting. When you entered, the noise increased tenfold & you were transported into a hectic frenzy of fast moving food. The enormous dining hall was crammed full of green laminated tables constantly being cleared of dishes & wiped down by Coles ladies in white coats with matching hats. As soon as we arrived, Mum’s eyes were scanning the hall for an empty table. If she spotted one I was immediately parked in a seat with all our parcels, while Mum went & stood in the queue with our tray. More often than not, we had to share a table with strangers, getting a whole table to yourself was a rare event. 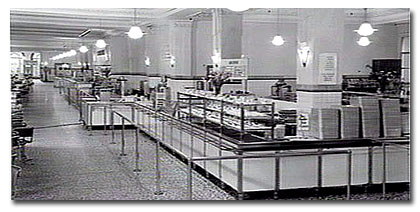 The food was good & the prices were cheap. There was roast beef, chicken casserole, trays of roast vegies, sandwiches, cakes & lots more. Coles Fish & Chips were incredibly tasty with the crunchiest golden batter I’d ever eaten. The accompanying chips were hot & salty & served out with a large metal scoop. All meals were served up on thick white plates & cups with green patterned edging. My favorite part of the meal was “Frog in the Pond” – a clear plastic cup filled with jelly (red or green) with a chocolate frog inserted in the middle, surrounded by a few smarties & a dollop of cream. They also made the best “banana splits” with lots of chocolate topping & a generous sprinkling of chopped nuts & cream. No meal was complete without a creamy, fizzing “Lime Spider”.