The Australian television series Adventure Island  screened on the ABC  from September 11, 1967 to December 22, 1972 (repeats episodes ran from 1973–1976). It was jointly created by Godfrey Philipp, who produced the series, and actor-writer John Michael Howson, who also co-starred in the show. 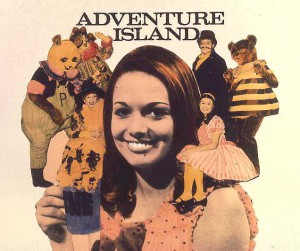 It was a pantomime style series set in the kingdom of Diddley-Dum-Diddley. The show was hosted by Nancy Cato from 1967 to 1968 and Sue Donovan from 1969 to 1972. Each episode featured one story and occasionally there would be a week long pantomime with all the cast taking on different roles. Each show would begin with Nancy in an enchanted wood (one of the show’s few direct similarities with The Magic Circle Club). In early episodes, Nancy would sit down behind a tree-stump lecturn on which was poised a magic book, open the book and begin to read the story. The story would be based on a place called Adventure Island and the residents of its town of Diddley-Dum-Diddley, and viewers would see the story played out by the characters themselves.

In later episodes, Nancy would begin the show by bantering with puppets Gussie Galah, Crispian Cockatoo and Matilda Mouse, then read from the book. At the conclusion of each chapter Nancy would talk to a cat puppet, which was named Samson in a viewer competition early in the show’s run.

The show was highly moralistic with a strong “good over evil” motif in every story.

The scripted part of the show—a story serialised over five days, Monday to Friday—usually involved the inhabitants of Diddley-Dum-Diddley being set upon or tricked in some way by one or more of the “baddies”. On many occasions the usually dimwitted Clown (with sawdust for a brain and an appalling memory) would save the day with his uncanny ability to see through disguises, a skill not possessed by the other residents of the town.

Some weeks’ episodes would include no baddies at all, but instead centre around a visitor to Diddley-Dum-Diddley, often a relative of one of the characters, or a business-person or entrepreneur of some sort.

Concerned that some children may become upset by the mischief created by the baddies or the dilemmas faced by the Diddley-Dum-Diddleys, it was common at times of high drama for a cast member to remind the young audience that “it always turns out all right on Fridays”.

The highly melodramatic, overplayed tone of the show was rooted in very traditional camp and pantomime traditions, and utilised a genre of light entertainment and humour appreciated by children for its simplicity and by adults for its escapism and sly nods.

As in The Magic Circle Club all of the characters in Adventure Island, including the hostesses, possessed magic powers which they could call upon if the need arose. These were used sparingly, most likely because of technical difficulties in performing videotape drop-edits with the cumbersome videotape technology of the day.

Each Friday episode generally concluded with the hostess visiting Adventure Island and sitting with the characters to discuss the week’s adventure. She would transport herself there by clicking her fingers.

Samson (the pussycat) was actually a magic cat who would be invisible until Monday afternoon’s episode. To make him appear, the hostess would need to answer a question he would ask from “beyond”. He would disappear again on Friday afternoons by sneezing.

The show was taped at the ABC’s Melbourne studios every Sunday and Monday and then shown throughout the week. For quite a while the show was Australia’s top children’s tv show and won a TV Week special logie in 1968, the first logie award ever given to a children’s programme.

I adored this show, my favourite characters were Liza & Flowerpots. What I didn’t realise at the time was that a few of the female characters are actually played by men! They don’t make children’s television like this any more. ( I don’t think they’d get away with it!).