Who could forget Super Stuff! Every kid wanted some & not all of us were lucky enough to get it. The most memorable thing about it was the unique smell! You mixed the powder with water & shook. You then had to wait a few minutes  till it “set”.

When you opened the container you had a big blob of bright pink gooey stuff. It was fantastic… you could make all sorts of shapes with it, blow bubbles & god knows what else. I think every kid remembers their Mum warning them .. “if you get that on the carpet!!!!”.

I remember having several tubs of this stuff. As soon as it started to look greyish colored (which always happened after weeks of use), Mum promptly threw it in the bin. I can still smell & feel it now.. it was probably full of chemicals & children today wouldn’t be allowed anywhere near it! But we loved it.

Another enduring schoolyard favourite, Green Slime could be bought in small plastic rubbish bins  from any toy shop or newsagent. Manufactured by Mattel and introduced in the winter of 1976,  Slime consisted of a viscous, oozing green material made primarily from guar gum.

As the bucket said, this stuff was gooey, drippy, oozy, cold & clammy, just perfect for lobbing down the neck of your mate’s new polyester T-shirt. A later version came complete with rubber worms – ‘worms in slime’ eyeballs and  body parts – ‘Satan’s slime’.

Later, its cousin – Glo Putty – became even more successful, despite many parents fearing it was radioactive and refusing to let their children have it. 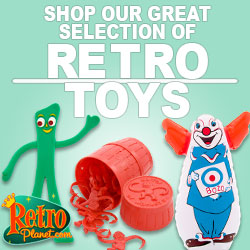