School Milk was provided to Australian schools in the 70’s & every kid HAD to drink it! After all the government was providing it free. 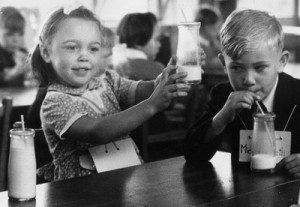 It came in small glass bottles (about 1/3 of a pint) & the entire class had a milk moustache for hours after wards. It used to get delivered outside the classrooms early in the morning & sat there getting nice & warm before it was distributed to us (by the milk monitors). These were always the good kids! In the warmer months, the milk was just about developing some biological film of butter or yogurt before consumption! The smell of 30 children drinking warm milk, permeated the class room, & then there was the sound of 30 straws all sucking up air when the bottles were empty.

I think I hated milk from the moment i was weaned & I have school milk to thank for that. It used to make me puke, and I remember being forced by the teachers to drink it. Warm, rancid smelling milk remains vivid in my childhood memories as does the panic, when the milk monitors arrived. Thankfully my mum had sympathy for my aversion to school milk & I was given a “note” for the teacher to say I was not allowed to drink the milk as it made me sick. Thanks mum!

A few years later the glass bottles were phased out & the milk came in little triangular cartons. It made no difference, it was still revolting.