The smell of Coppertone suntan lotion still sends me back in time. It’s one of those aromas you never forget. Endless summer days at the beach & numerous re-applications of Coppertone were part of life. If I lay on the beach & close my eyes, I can still smell it today. The iconic girl with the dog pulling her pants down was in every chemist shop & in the late 60’s, there weren’t many other brands. 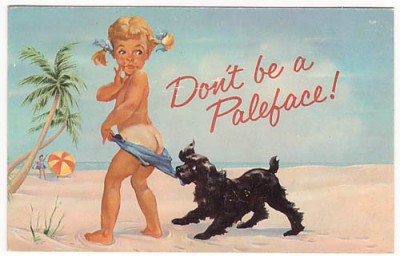 It seemed everyone had a bottle of this stuff in their bathroom cabinet and lots of us still have today.

Sunscreen might have been around longer than most of us realize. The first sunscreen appeared on the market in the late 1960s. Its purpose was to attempt to minimize the effects of ultraviolet light from the sun. It wasn’t until around 1972, however, that labeling of the sun protection factor, or SPF, was introduced in the U.S. These sunscreens, which were improved and modified over time, were designed to block ultraviolet-B radiation.

Sources vary as to who invented the first sunscreen, but most acknowledge that Milton Blake, a South Australian chemist, experimented unsuccessfully with creating a sunburn cream in the early 1930s. Even others attribute the invention of sunscreen to Benjamin Green. In the 1940s, Green, a Miami, Florida physician, prepared a red jellylike substance in his own kitchen and then tried its effectiveness on his own bald head. Green continued to experiment with his sunscreen formula until he created what became known as Coppertone suntan cream in 1944. Coppertone suntan cream, scented with jasmine, was the first consumer mass-produced sunscreen product.is

Coppertone quick tanning lotions (QT) was also introduced in the 60’s. Tan indoors as well as outdoors in only 4-5 hours. This stuff undoubtedly made you turn a brilliant shade of orange! Who knows what the ingredients were!
Watch a 1960’s Coppertone Quick Tan Commercial. Very cheesy!