The 70’s brought a whole new generation of hair products. New formula shampoo’s were all the rage & these three were some of the most memorable.

‘Agree’ was a popular hair care brand in the 1970s, when the shampoo and conditioner vowed to help young consumers avoid the scourge known as “the greasies.” S.C. Johnson’s advertising for its Agree shampoo, and the accompanying cream rinse and conditioner, promised to fight the oily hair that it said teens in particular were especially susceptible to. The ads said that Agree conditioner, for example, was 99.75% oil-free and provided “beautiful wet combing and great conditioning, without the use of oils that can cause the greasies.”

Agree was later discontinued, although the hair care products are not forgotten, and some devoted fans still buy dusty bottles  via the Internet.

“Gee Your Hair Smells Terrific” shampoo became popular in the mid-1970’s. The shampoo and conditioner were created and marketed by the Andrew Jergens Company. GYHST was known for its spicy floral fragrance that lingered for hours after washing hair and drying. This shampoo came in a magenta colored bottle with bright, bubbly lettering on the label. The packaging was as much of an attention grabber as the product name and distinctive fragrance. 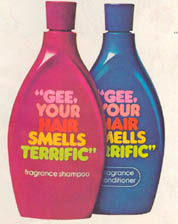 In its heyday this shampoo’s marketing campaign claimed to stop men dead in their tracks as a young woman with a shining, bouncy mane flounced past them on the sidewalk. As she passed, they would stop her and exclaim “Gee Your Hair Smells Terrific!” It may or may not have caused young men to turn their heads, but this shampoo really did smell great.

Many people loved GYHST shampoo and conditioner, and were bewildered when they could no longer find it at their local pharmacy or discount store. For unknown reasons, Jergens discontinued this popular shampoo in the early 1980s. This decision was not a popular one among the users of this shampoo that has a cult like following.

Discontinuing products is not unusual in the cosmetics and beauty product industry. People tend to buy products that contain the newest ingredients, formulated from cutting edge technology. Though it is not clear whether or not sagging sales or the need for a new and improved shampoo is the reason for Jergens’ decision to stop making this product.

Body on Tap Shampoo was created in 1978 by Bristol-Myers Products and came in an “oily”, “normal” and “dry” formula.The original formula contained 1/3 beer which people used to believe made hair fuller and softer. Whether it was the beer which enhanced the fullness and softness of the hair or not, the shampoo did leave hair very soft and full, especially after blow drying.

I remember all three of these products, with ‘Ágree’ being the one I used the most. My mum bought  me this in my early teens when the hormones started to kick in & I along with most kids in my class suffered greasy teenage hair. Then came ‘body on tap’, which had beer in it, so it must be good!!

Watch the Agree Shampoo Commercial of the 70’s