It was built and operated by Sir Frank Selleck, the former Melbourne Lord Mayor. In the 1960’s it was programmed by Hoyts and advertised in their newspaper directory. Village eventually became partners in the operation and by 1984 the site was twinned.

The speakers were attached to metal posts (2 per post) & you hung it inside the drivers window. It was not uncommon for these to be faulty, so you had to test them out before settling in your parking bay. In later years the sound system was a little more sophisticated with clamps on your aerial, which played the movie sound through your radio.

I recall visits to the drive-in during both summer & winter months. In summer, all the windows were open & you desperately hoped for a cool breeze . Lots of folk watched the movie from the bonnet of their car during those balmy evenings. During winter all the windows were shut & my dad even turned the engine on to run the car heater for a few minutes every now and then. 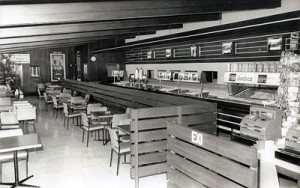 I was all rugged up in the back seat in my pjamas with my blanket & pillow. I rarely recall staying awake long enough to see the end of the movie.

The Cafeteria was full of people prior to the movie starting,as many came early & had dinner first. It was self-serve, so you pushed your tray along, helped yourself  & paid the cashier at the end. The floor was linoleum & the chairs were bright orange vinyl (very stylish for the 70’s). You could eat in or take your food  back to your car. In winter the hot food inevitably lead to the windows fogging up & I can see mum with her hanky desperately trying to demist in time for the movie. Hamburgers, hot dogs & chips were standard fare with an obligatory chocolate coated(Jumbo) ice cream cone at interval coupled with a long wait in the queue for the toilets! 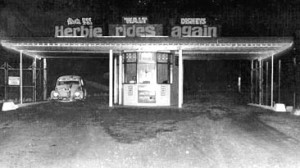 Hundreds of movies were shown over the years, with memorable ones (for me) being “Herbie Rides Again” which was the big Boxing Day attraction in the late 1970’s, “Fiddler on the Roof”, “Jaws” & ” One Flew Over the Cuckoo’s Nest”.