Summer was my favourite season, it meant daylight saving, balmy evenings & lazy days on the beach! Frankston Beach was calm with virtually no waves, so it served as a haven for families during the hot Melbourne summers. In the 60’s & 70’s thousands of people spent sweltering days on the beach & it was not uncommon for entire families to spend the night sleeping on the beach to escape the heat. 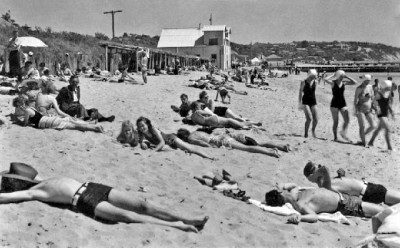 In those days the Life Saving Pavillion was a kiosk serving hot dogs, hamburgers, chips, ice creams, lollies & cold drinks. The area surrounding the kiosk was the most sought after, as each trip for refreshments required a walk across the red hot sand. It was not uncommon on 40 degree days to have the odd person perch on the edge of your beach towel, as a resting point between hot sand dashes!

The sand was a sea of colored umbrellas & finding yours after a dip in the sea was no mean feat.

In the late 60’s & early 70’s, 3KZ ‘buzzed around in beach buggies’ and 3DB’s cabin cruiser prowled around off shore. The mobile units of the two biggest top forty stations, 3UZ and 3AK travelled around the Bellarine Peninsula and then swapped to the Mornington Peninsula. The radio stations played music through the kiosk speakers & the beach became alive with music, sand, sea & the pungent smell of Coppertone in the air.

Frankston Pier is considered an iconic landmark. It was originally built in 1857 so fishermen could ship their catches to Melbourne. It has been extended and repaired over the decades. It has always been popular with fisherman and boaters, and summer weekends will find children diving off the pier in contravention of local by-laws.

In 1959, the Hollywood film, On the Beach, starring Gerogory Peck & Ava Gardnery, was partly filmed in Frankston, at its railway station & surrounding area.The original novel of On the Beach was written by novelist Nevil Shute, who lived in Frankston’s south-east, in what is now the Frankston suburb of Langwarrin.