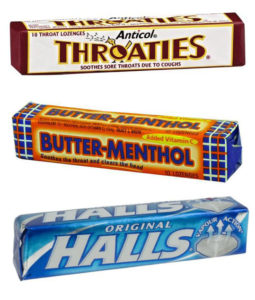 Cough lollies, or throat lozenges so it sounds more likely they may work, though I’ve always preferred “Lollies” as they were sweet & sold the lolly isle along with the chewing gum.

They have been around since ancient times but it was during the 19th Century that they became increasingly popular; largely due to the discovery that the addition of heroin and morphine to the lolly would surpress the cough via the brain. Heroin and morphine weren’t the only extreme ingredients known to be in cough lollies and one company claimed that an American manufacturer listed formaldehyde in their ingredients. Although whether this is actually true remains to be seen.

These ingredients were eventually removed from cough lollies (thank goodness!) when concerns were raised about addiction and, today, most of them simply contain some kind of menthol. Though they do ease the throat and provide temporary relief from coughing, they do not serve as complete medication to cure illness.

The brands I remember are Butter-menthol, Anticol- Throaties and Halls but I am sure there were many others. Now it’s all Strepsil, Fisherman’s Friend & a host of products with all sorts of “Natural” additives but I suspect they are still more lolly than lozenges.

I can remember eating them as if they were lollies & they may have eased the sore throat but hot lemon & honey was my mums got to when the dreaded lergy hit.

One Reply to “Cough Lollies”